Home » Blog » When To Get A Transmission Flush? – Will It Ruin The Transmission?
Previous Next

Whenever someone asks about having their car’s transmission serviced, some know-it-all always feels the need to put in his two cents: “You don’t want to service your transmission; that’ll ruin it!”

Let’s get one thing out of the way up front: A transmission service, performed properly by a qualified transmission technician, will never damage an automatic transmission. Not ever.

So why do so many people think there’s some type of cause-and-effect relationship between a transmission flush and the transmission failing? Because the two often seem to occur at about the same time. 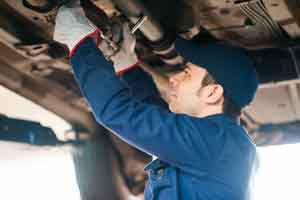 A transmission service is maintenance. It’s something you’re supposed to do while the transmission is working properly to avoid problems later, much like changing your car’s engine oil or rotating the tires.

It’s like exercise: You know that exercise is a great way to help your body stay in shape, and it’s something you should do regularly. But if you’re having a heart attack, you don’t start doing jumping jacks — it’s a little late for that!

That’s not to suggest that a transmission service can’t ever save a transmission that’s beginning to exhibit performance problems; sometimes it can… it depends on what’s causing the problem.

Changing the transmission fluid right away, the instant it begins to slip because of fluid shear, can sometimes save the transmission and buy you more time. But it doesn’t take long before that shear causes the clutches to wear out because of the additional friction and heat being generated. Then it’s too late for a service to help.

The best way to avoid the damage caused by fluid shear is to have the fluid changed regularly — before you begin to notice a problem with the transmission’s operation. Once you start to feel a problem, it may be too late.

That’s why so many people make the connection between a transmission service and the transmission failing: They tried to use a service to save a slipping transmission, but they waited too long.

Your local Cottman center can help you decide whether a transmission service could help you avoid a costly repair.