When To Replace Shocks: Does Your Car Need New Shocks?

Home » Blog » When To Replace Shocks: Does Your Car Need New Shocks?
Previous Next

When To Replace Shocks: Does Your Car Need New Shocks?

Back in the day, every time you watched your TV or opened a newspaper you could count on seeing an ad for someone trying to sell you a set of shock absorbers. They promised to make your car feel like it was floating on air, and all for just a few bucks.

You don’t see those ads any more. Why not? Don’t car’s still have shock absorbers? Don’t they still go bad?

Yes, your car still has shocks and yes they still go bad. But they’re a little different today. Back then, shock absorbers were a separate component. They were fairly easy to replace so everyone wanted to sell you new ones.

Getting New Shocks And Struts 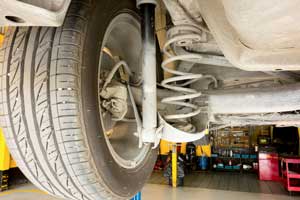 Yes, those shocks and MacPherson struts still go bad, but they aren’t as easy to replace.

That doesn’t mean you don’t need to have them checked occasionally and have them replaced if they’re worn out. Worn shocks can cause unusual tire wear, a seriously bouncy ride, and can even affect your ability to control your car on rough roads. But, because of the cost and the difficulty in replacing them, you won’t want to replace them simply based on time or mileage.

The technicians at your local Cottman center can help you determine when to replace your shocks, and whether your car needs new MacPherson strut or not. Let them know whether you’ve noticed any changes in the ride or bumpy wear on the tires, and they’ll check the shocks to see whether you need new ones.

From there, they’ll let you know whether replacing the MacPherson strut is necessary. And they’ll make sure you get the right struts for your particular driving characteristics and handling requirements.

Yes, cars still have shocks, and yes, they still go bad. And the technicians at your local Cottman center will be happy to help you determine whether you need new ones to keep your car handling properly for years to come.